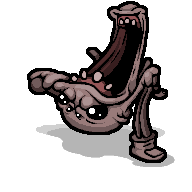 Widow is a boss that can appear in

Widow makes large leaps towards Isaac, at approximately double the distance of Monstro, and can perform the following attacks after landing: