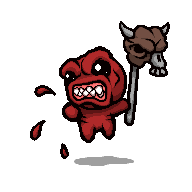 Once his health is below half, War's horse blows up, dropping War, who performs a sobbing animation.

War deals a whole heart of contact damage in both phases and during his charge.

Mega Troll Bombs when he ascends off-screen and summons a single Troll Bomb behind his path when he charges through the screen. When transforming into his second phase, he shoots 6 projectiles in all directions, as well as each time he stops chasing Isaac in this phase.