Binding of Isaac: Rebirth Wiki
Register
Don't have an account?
Sign In
Advertisement
in: Added in Afterbirth, Bosses, Modified in Afterbirth+,
and 5 more
English 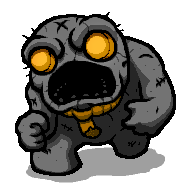 Ultra Greed is the final boss of Greed Mode and Ending 18.

Ultra Greed is fought in a unique vertical double-size room with golden Boss Room doors on all 4 walls in regular positions. When Isaac enters the boss room, Ultra Greed starts out hanging on a noose before he abruptly cuts it off and lands on the ground. Ultra Greed cannot be damaged until he drops to the ground. Ultra Greed then performs a variety of attacks in addition to wandering around the room:

All of Ultra Greed's attacks deal a full heart of damage and causes Isaac to drop coins on hit. If he walks over any coins on the ground, he collects them, healing him for 4.375 HP each.

When Ultra Greed has low health, he turns red, which increases his attack speed and movement speed. This effect also occurs if Ultra Greed is healed by enough Heart Ultra Greed Coins, although only providing a temporary effect.

When Ultra Greed's health bar is depleted, he turns into a golden statue and drop the end chest and the

Greed Donation Machine. If in Greedier Mode, he instead begins his second phase.

Greedier Mode is a mode added in Afterbirth ♰. It is unlocked by depositing 500 coins in the Greed Machine.

Playing on Greedier Mode gives Ultra Greed a second phase where his gold statue form comes to life. This phase is known as Ultra Greedier, and is the final boss of Ending 19. Additionally, he performs several new attacks:

After defeating Ultra Greedier, he explodes, dropping a coin pickup and turning the entire room into solid gold. It is at this point when the end chest and the

Completing Greedier Mode with a character will unlock the corresponding Greed Mode unlockable if it hasn't been unlocked.

Damage scaling is a mechanic introduced in The Binding of Isaac: Afterbirth to provide a more challenging experience to the players, enabling some enemies to retaliate against high damage attacks by deploying an "armor" of sort to greatly reduce the amount of damage taken. Further details and an in-depth explanation may be found here.