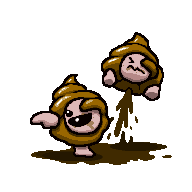 Turdlings are a boss added in The Binding of Isaac: Afterbirth that can appear:

The Turdlings spawn as a pair and wander around the room. Each individual Turdling has one attack in total which is performed independently of the other: