Binding of Isaac: Rebirth Wiki
Register
Don't have an account?
Sign In
Advertisement
in: Added in Afterbirth+, Chapters, Modified in Repentance,
and 2 more
English 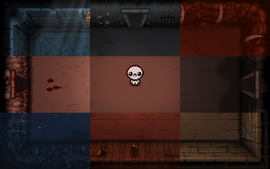 This article is about the chapter. For the item, see Void.

The Void is a chapter added in Afterbirth+. It is unlocked by defeating Hush. The Void is one of five final levels in The Binding of Isaac, alongside the

Each room in this chapter takes the form of a different chapter, ranging from

Burning Basement. The Void is extremely large compared to other floors, and it is the only floor in the game (not counting XL floors) to contain multiple boss rooms. Most of them contain random bosses from other floors, including some of the final bosses, such as It Lives, Satan, Isaac, etc. One of them, however, contains the main boss of the floor, which is always Delirium.

Monsters encountered in The Void have a much higher chance of appearing as Champions.

The Portal monster is exclusive to this floor and all rooms in which it would have been previously encountered on other chapters now only generate on this chapter.

The Void is unlocked by defeating Hush. After defeating Hush at least once, a new exit will appear in the upper right-hand corner of the 2x2 boss room in which Hush was fought. The new room contains nothing except for a Portal. It does not spawn enemies and serves as the entrance to The Void.

After unlocking The Void, the portal can then appear after every major boss starting with Mom, even if Hush was not defeated in that run.

The deeper the boss, the higher the spawning chance:

This floor contains multiple boss rooms, only one of which will contain Delirium. The other boss rooms contain previous bosses, including the other final bosses, except Mega Satan, Hush, Mother, Dogma, the Ultra Harbingers, and The Beast.

The music that plays in The Void is titled Terminus.