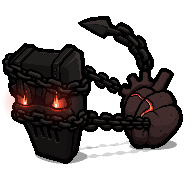 The Visage is a boss added in The Binding of Isaac: Repentance that can appear in

The Visage is bound together by a chain and cannot be damaged; the chain must first be destroyed to progress the fight, and has 150 HP. During this phase, it only has one attack:

Once the chain is broken, the mask and heart are unbound from each other and their behavior changes:

When the heart drops to half HP, its visual outer shell breaks, exposing the heart. The Heart's movement becomes quicker and more erratic along with an attack change:

Once the heart has been killed, the mask permanently deactivates.