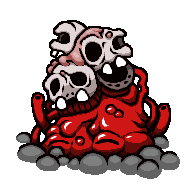 The Stain is a boss added in The Binding of Isaac: Afterbirth that can appear:

The Stain burrows underground when Isaac is not within range. While burrowed it becomes invincible and follows Isaac's movements. When close to Isaac, it pops out and performs one of the following attacks:

It will stay vulnerable for a brief moment after performing an attack before quickly burrowing underground again.

◼ Grey: Continuously spawns 2 Round Worms instead of Chargers, with a maximum of 3 at any time. Never fires barrages of bullets.

When fighting The Stain following obstacles can sometimes spawn: