Binding of Isaac: Rebirth Wiki
Register
Don't have an account?
Sign In
Advertisement
in: Added in Repentance, Bosses, Chapter 2.5 Bosses,
and 3 more
English 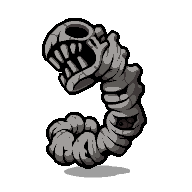 The Shell is a boss added in The Binding of Isaac: Repentance that can appear in the

The Shell always spawns in a pair consisting of 4 body segments and a head segment each. They are always fought in a double-sized room.