Binding of Isaac: Rebirth Wiki
Register
Don't have an account?
Sign In
Advertisement
in: Modified in Repentance, Added in Afterbirth+, Bosses,
and 6 more
English 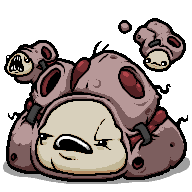 The Matriarch is a boss added in Booster Pack #5 of The Binding of Isaac: Afterbirth † that can appear:

The Matriarch hops randomly around the room and performs the following attacks:

After taking 340 damage, the Matriarch rapidly spawns waves of glowing red Fistuloids that have 20 HP and quickly lose health, causing them to shoot their maggots almost immediately.

After taking enough damage, the Matriarch repeats the phase transition attack from Phase 1 to 2. During the rest of this phase The Matriarch no longer spawns Fistuloids and only uses the Chubber and projectile attacks.

When at low HP (after taking ~540 damage), The Matriarch's shell splits into a medium-sized Fistula, 2 small Fistulas and a Fistuloid, and she turns into a low HP