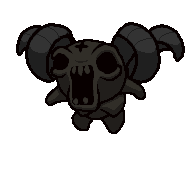 The Lamb is the boss of the

Dark Room, and the final boss of Ending 15.

The Lamb floats towards Isaac and performs the following attacks:

Once The Lamb reaches 50% HP, its body detaches from its head and falls to the ground. This phase has each part of The Lamb attacking independently of each other.

The head of The Lamb continues to chase Isaac and can still perform most of the attacks from Phase 1. It loses the explosive shot attack and no longer spawns Attack Flies but gains 3 additional attacks:

The body of the Lamb remains stationary at the position the Lamb was at the end of Phase 1. The body has one attack which it performs at random intervals but while the head is attacking: