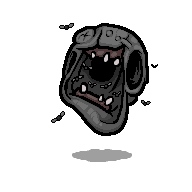 The Husk is a boss that can appear in the

The Duke of Flies, but much faster and can perform the following attacks: