Binding of Isaac: Rebirth Wiki
Register
Don't have an account?
Sign In
Advertisement
in: Modified in Repentance, Modified in Afterbirth+, Bosses,
and 18 more
English 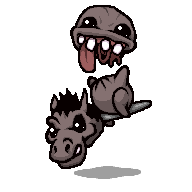 The Headless Horseman is a Harbinger that can appear in all environments of Chapters 1, 2, 3 and 4; replacing any other Horsemen.
The head has 100 HP. The body's HP scales depending on what Chapter it is encountered- ranging from 60-300 HP.

The Headless Horseman consists of two entities: The head and the body. Each performs attacks independently of the other.

The head has the following attacks:

The body has the following attack:

Both the head and the body deal a whole heart of contact damage.