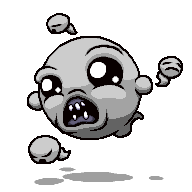 The Haunt is a boss that can appear:

Phase 1 The battle begins with three

Lil' Haunts circling The Haunt, who floats around the room and is invulnerable. The Haunt and its Lil' Haunts can still do contact damage to Isaac while incorporeal.

Phase 2 The Haunt, now vulnerable, quickly flies to the upper wall of the room and begins to move left and right along the wall while periodically performing the following attacks:

During The Haunt's transition to this phase, it can deal contact damage during the dash to the upper wall.
The Haunt attacks based on its location and distance. If it cannot make it to a certain position, it gets stuck attempting to reach it and will not attack until it can resume moving.

During both phases The Haunt deals a whole heart of contact damage.

◼ Black: Only two Lil' Haunts circle The Haunt in the first phase. In the second phase, The Haunt spawns 1-2

Spiders instead of firing a brimstone laser.

◼ Pink: Only one Lil' Haunt circles The Haunt in the first phase. In the second phase, The Haunt has 50% less HP (100). The Haunt's laser is replaced with two diagonal Brimstone lasers that reflect once off of walls. The Haunt's blood-shot attack is changed to 8 shots and is aimed towards Isaac.