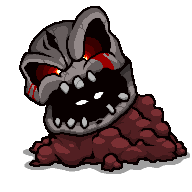 The Gate is a boss that can appear:

Mega Maw, The Gate is stationary and will perform the following attacks:

Big Spiders instead of Leapers. The Big Spiders are tossed directly towards Isaac instead of landing randomly in the room, and can be damaged by The Gate's blood shots, like the Leapers. It does not perform the Brimstone attack.

◼ Red: Does not spawn any enemies and has a completely different set of attacks, including: