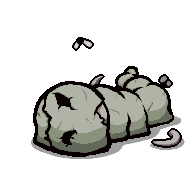 The Frail is a boss added in The Binding of Isaac: Afterbirth that can appear:

The Frail in its first phase has 100 HP like Pin and behaves identically with the only difference that The Frail is less accurate in its jumps and generally overshoots or undershoots Isaac.

Upon its HP being depleted, The Frail's appearance becomes skeletal. It now has 200 HP and performs the following attacks: