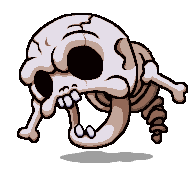 The Forsaken is a boss added in The Binding of Isaac: Afterbirth that can appear: