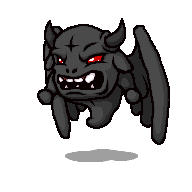 (With either another Fallen or

The Fallen is a boss that can appear on any main path Chapter, with the prerequisite that Isaac has entered (not just encountered) a Devil Room through any methods, and with the following exceptions:

It is also encountered as the first phase of the

The Fallen moves randomly around the room in cardinal directions and can perform the following attacks:

The Fallen deals a whole heart of contact damage in both phases.