The Duke of Flies 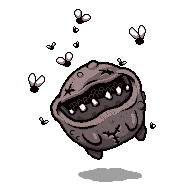 (with another Duke of Flies, Monstro or Rag Man)
Degraded Boss

The Duke of Flies constantly floats around the room in diagonal directions. Knockback from tears and other sources can cause him to change travel direction. He has three attacks that he can perform while he floats:

Moters instead of the large Attack Flies and shoots blood shots in eight directions when spreading the orbiting flies. He can spread the Attack Flies at any moment instead of only performing it when having enough of them orbiting him, similar to

Suckers instead of the large Attack Flies.