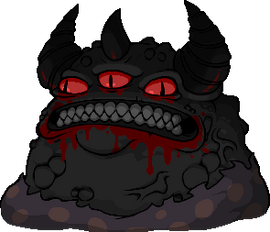 The Beast is a boss added in The Binding of Isaac: Repentance DLC. She appears in

Home and is the final boss of Ending 22 and The Binding of Isaac as a whole.

Dogma, Isaac is given

Dogma, granting him flight and allowing him to traverse The Beast's 2D Crawl Space-like arena.

Holy Mantle shield, the effect of

The Wafer (if playing in Normal Mode), Prevents Isaac's speed from going under 1.1, and +2 damage, and heals him up to 6 hearts with

At the start of the fight, The Beast sits inactive in the background. Flying around The Beast are four Ultra Harbingers, which attack Isaac one at a time in the order of

Ultra Death. Once they have all been defeated, The Beast lets out a roar, submerges into the lava, then reemerges on the right side of the screen, beginning her fight.

During her first phase, The Beast uses the same sequence of attacks indefinitely:

Even if The Beast's HP drops below the threshold for her second phase, this will always still be the first attack she performs every single time.

The Beast enters her second phase below 6660 HP and loses her inhaling attack, but gains 2 new ones. Additionally, during the charging attack, there are more rocky obstacles and some stalactites are cracked and fall when Isaac passes underneath. (As before, the screen scrolls while The Beast charges, with Isaac's position on the screen being maintained.)

At the end of a charge, The Beast performs one of two attacks:

After using either of these attacks, The Beast submerges into the lava and causes glowing orange lines to appear beneath Isaac and in other random areas. The glow of these lines increases in intensity over time before launching out a large fiery projectile that flies up and falls back into the lava. The Beast gradually increases the rate at which projectiles are launched before eventually reemerging from the lava on the opposite end of the screen and launching a small burst of large fiery projectiles arcing in all directions.

The Beast enters her third phase at approximately 33% HP and is indicated by a burst of blood. The Beast is forced to submerge into the lava and reappear on the other side of the screen, then begins charging towards Isaac indefinitely while more stalagmites and stalactites spawn behind him. (As before, the screen scrolls while The Beast charges, with Isaac's position on the screen being maintained.) Cracked stalactites do not appear during this phase.

Once The Beast's HP reaches approximately 2000, her horns crack and her body ruptures in boils. She degrades through two more stages: losing 2 horns and an eye upon reaching roughly 1000 HP, and losing another eye, another horn, all of her teeth, and generally having a melted look upon reaching roughly 500 HP. Upon defeat, a large light ray comes from above and strikes her down, followed immediately by Ending 22.

Damage scaling is an unclear mechanic introduced by Nicalis in The Binding of Isaac: Afterbirth to provide a more challenging experience to the players, enabling some enemies to retaliate against high-damage attacks by deploying an "armor" of a sort to greatly reduce the amount of damage taken. Further details and an in-depth explanation may be found here.