Binding of Isaac: Rebirth Wiki
Register
Don't have an account?
Sign In
Advertisement
in: Modified in Repentance, Added in Afterbirth+, Bosses,
and 10 more
English 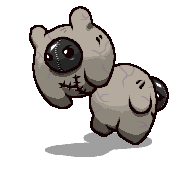 (With The Husk or Lokii)
Degraded Boss

Sisters Vis are a boss added in The Binding of Isaac: Afterbirth † that can appear in all environments of Chapter 3 (

The attacking Sister Vis finishes a few seconds before the other Sister Vis stops rolling.

When one of the two is killed, the other becomes enraged.