Binding of Isaac: Rebirth Wiki
Register
Don't have an account?
Sign In
Advertisement
in: Added in Repentance, Bosses, Chapter 2.5 Bosses,
and 2 more
English 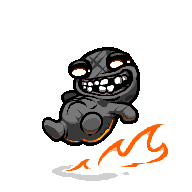 Singe is a boss added in The Binding of Isaac: Repentance that can appear in the

Singe always spawns with 4 damaging spiked rock balls that can be pushed around; these play an important role in his attacks. Any spiked rock caught up in an explosion launches rapidly across the room, bouncing when colliding into obstacles, walls, and each other.