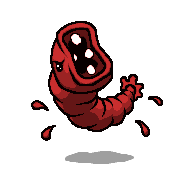 Scolex is a boss that can appear in the

Scolex is only vulnerable in his blinking tail segment. He burrows into the ground before performing the following attacks: