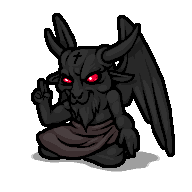 Satan is the boss of

Sheol, and the final boss of Ending 12.

The battle against Satan has three distinct phases.

The first phase starts with a slight delay after Isaac enters the room:

Once The Fallen is dead, the Devil Room statue at the top of the screen transforms into Satan's first form. He stays near the top of the room moving horizontally and performs the following attacks:

After depleting his entire second phase health bar and reaching third of his total HP, he flies off-screen and has one attack:

Satan's projectiles and contact damage deal a whole heart of damage. Once Satan is defeated, remaining Kamikaze Leeches die alongside him.