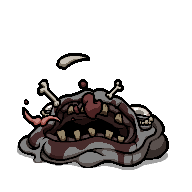 The first phase occurs against Rotgut's "face" in its regular boss room. Rotgut is stationary in the center of the room and performs the following attacks:

Once Rotgut's first form has been defeated, it sucks Isaac, any monsters, and floating projectiles into its mouth and sends Isaac into a Crawl Space-like interior. The second phase consists of a large maggot that sits in the bottom right of the room and performs attacks depending on Isaac's position.

If Isaac is on the platform, the maggot uses its rear end:

If Isaac is below the platform and on the ground, the maggot uses its head:

Defeating the Maggot allows passage into the next chamber, which contains Rotgut's "heart". The heart switches randomly between two modes of projectile patterns that occur for the entire duration of the fight:

The heart can perform additional attacks that occur independently of its two set modes:

After defeating this phase, Isaac is automatically ejected out of Rotgut's insides and back into the boss room.