Binding of Isaac: Rebirth Wiki
Register
Don't have an account?
Sign In
Advertisement
in: Added in Repentance, Bosses, Bugs,
and 6 more
English 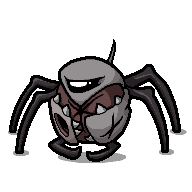 Reap Creep is a boss added in The Binding of Isaac: Repentance that can appear in the

Dank Depths, as well as in the

Mines in the alternate path.

Upon spawning, Reap Creep jumps up to the top of the Boss Room similarly to

The Haunt. It starts off taking

Wall Creep's form and can perform the following attacks: