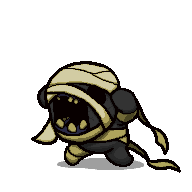 Rag Man is a boss added in The Binding of Isaac: Afterbirth that can appear:

Rag Man chases Isaac if there are no

Rag Man's Raglings alive and can stop to perform the following attacks:

Once Rag Man is killed, his Raglings' remains disappear, and the Raglings that are still alive won't leave remains upon death.

Spiders instead of a Ragling. He fires a spray of 3 bullets, similar to

Monstro, instead of a resurrection attack.

◼ Red: Does not fire homing bullets, and instead constantly creates and revives Raglings. The Raglings spawned by this version have the same red color as Rag Man and have 19.8 HP (34% less than the normal ones).