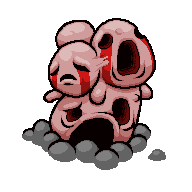 Polycephalus is a boss that can appear:

Polycephalus burrows underground when Isaac is not within range. While burrowed he becomes invincible and follows Isaac's movements. When close to Isaac, he pops out and performs one of the following attacks:

He will stay vulnerable for a few moments after performing an attack before quickly burrowing underground again.

Para-Bites instead of Round Worms. All projectile attacks are replaced with a ring of six projectiles.

◼ Pink: Two Polycephaluses, each with 50% HP (100), replace the normal Polycephalus. They do not spawn Round Worms.