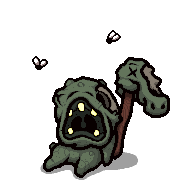 Pestilence deals a whole heart of contact damage in both phases, though without flight Isaac is more likely to be damaged by the Green Creep instead.

◼ Pale Grey: Leaves a trail of slowing White Creep instead of Green Creep, shoots 6 projectiles in all directions instead of an Ipecac shot and spawns

Trites instead of Chargers or Spitties. He cannot spawn more than 3 Trites at once. It spawns

Spiders instead of Attack Flies in Phase 2.