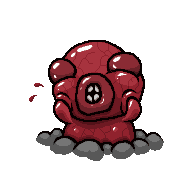 Mr. Fred is a boss that can appear:

Mr. Fred stays stationary in the middle of a 1x2 or 2x1 room and performs the following attacks: