Binding of Isaac: Rebirth Wiki
Register
Don't have an account?
Sign In
Advertisement
in: Added in Repentance, Bosses, Modified in Afterbirth,
and 8 more
English 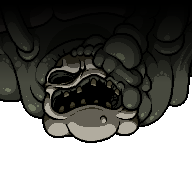 This article is about the final boss of Corpse. For the boss of chapter 3 and chapter 3.5, see Mom.

Mother is a boss added in The Binding of Isaac: Repentance and the only boss of the second floor of the

Corpse, as well as the final boss of Ending 21.

Upon entering the boss room in

Corpse II, the room is empty except for a hole in its center. Walking into it drops Isaac down into the arena where Mother is fought.

Mother begins the fight attached to the top of the room and is stationary, similar to

Mega Satan. Her face and hands can all be attacked to deal damage to her and she uses them separately in her attacks:

After losing 2222 HP, Mother retracts her head and arms into her body before releasing a green

Mega Blast laser down the middle of the arena, destroying the lower wall and expanding the area of the room. She then separates from the top wall, launching her head into the center of the room. From this point on, she slides slowly towards Isaac when she isn't performing one of her attacks: