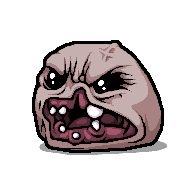 The Duke of Flies, Larry Jr. or Fistula)
Degraded Boss

This article is about the boss. For the posthumous version, see Monstro II. For the enemy, see Ministro. For the item, see Lil Monstro.

Monstro is a boss that can appear in the

Note: Layouts 1 and 11 are identical.

Layouts 8 and 9 no longer appear, as small boss rooms have been disabled.