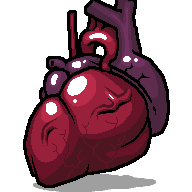 After being killed 11 times, Mom's Heart is permanently replaced by

It Lives. However, even after being replaced by It Lives, there are a few circumstances in which Mom's Heart can still be fought:

At the beginning of the fight, Mom's Heart is always accompanied by 2

Eyes. After awhile, Mom's Heart retreats upwards, becoming invulnerable and launching four diagonal lines of red projectiles in a spread that slowly rotates clockwise. When each original Eye is killed, another one spawns in its place at near the top of the arena.

After the second set of Eyes have been killed, Mom's Heart alternates between two attacks:

After reaching 60% HP, Mom's Heart beats slightly faster and continues the same behavior but includes new projectile patterns and replaces the types of monsters it spawns.

After reaching 30% HP, Mom's Heart beats much faster and no longer retreats upwards and instead performs projectile attacks and spawns enemies simultaneously. However, after finishing each projectile pattern, if there are any monsters alive, it will not perform another pattern until they are killed. In addition, a second wave of monsters no longer spawns after the first is killed.

Brimstone lasers that rotate either clockwise or counter-clockwise for a duration before stopping for a moment and then repeating the attack.

All of Mom's Heart's projectiles deal a whole heart of damage. The heart itself does not deal contact damage.

All of Mom's Heart's projectile attacks can hurt and kill spawned monsters.

The beginning of this fight is similar to one from Chapter 4, as Mom's Heart is always accompanied by two Eyes and retreats upwards after awhile, shooting the same four slow-moving lines of projectiles. However, a second pair of Eyes does not replace the first, and after both initial Eyes are killed, Mom's Heart lowers itself and no longer retreats upwards.

After reaching 60% HP, Mom's Heart beats slightly faster and replaces the patterns from its first phase with the following patterns:

After reaching 30% HP, Mom's Heart beats much faster, keeps the patterns from its previous phase and gains the following patterns:

It also regains 2 patterns from its first phase:

Brimstone lasers in opposite directions that slowly rotate either clockwise or counter-clockwise at a steady pace. During this, it also shoots 2 continuous streams of projectiles, one that follows Isaac's movements and the other mirroring the first.

Brimstone lasers also only deal half a heart of damage.

Everything Is Terrible!!! changes[]