Binding of Isaac: Rebirth Wiki
Register
Don't have an account?
Sign In
Advertisement
in: Modified in Repentance, Modified in Afterbirth+, Bosses,
and 13 more
English 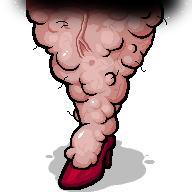 If an I AM ERROR room is used to skip her fight.

Boss item if neither are unlocked
Void Gateway if unlocked (5% Chance, Requires +10 Damage or +20 Items)
Gateway to Boss Rush (Time under 20:00 normally, or 25:00 in Mausoleum/Gehenna)

This article is about the boss. For the transformation, see Yes Mother (Transformation). For other uses, see Mom (Disambiguation).

Dank Depths). She is the initial final boss of the game, and defeating her for the first time unlocks both the Epilogue ending and Chapter 4 (

Mom appears in a unique boss room that has a boss door in the center of all sides of the room. Mom can use these doorways to perform various attacks:

Gehenna. This version of Mom has noticeably bluer veins on her leg and stronger variations of her attacks:

Mom deals a whole heart of contact damage. This version of Mom never spawns as a champion.

◼ Blue: Has 793.4 HP (23% more), summons monsters more often and summons a different variation of enemies that were added in the Wrath of The Lamb expansion of the original game, which are:

◼ Red: Does not summon monsters at all, and instead repeatedly uses her foot stomp, which has increased speed. Occasionally, she will pause her stomps briefly to use one or both of the following attacks:

One of the grunts Mom makes preceding her stomp attack.
Mom laughing after landing a hit on Isaac.
Mom wailing upon defeat.