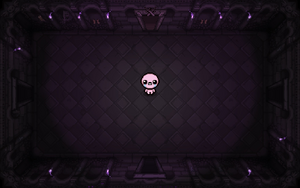 The Mausoleum is the alternative floor to the

The Depths and was added in The Binding of Isaac: Repentance.

Mausoleum is an occult-themed stage. Unique features of this stage include Teleporters and Grudges.

The Depths I. It costs two full hearts to enter. The damage taken ignores all forms of damage reduction, including

The Wafer and invincibility.

The door to Mausoleum II will not appear after defeating Mom.

You can find both Mom and Mom's Heart in Mausoleum II, and they are both tougher and harder than their counterparts in

The Depths II. After Mausoleum Mom is defeated, a sealed red door appears, requiring both

Knife Piece 2 to be stabbed into the slot. The following room contains Mausoleum Mom's Heart, and once that is defeated, the entrance in Mausoleum Mom's room will lead the player to

If the floor is exited without killing Mausoleum version of Mom's Heart, the player will go to

The alternative floor to Mausoleum is

Gehenna. It is unlocked after all bosses from this floor have been defeated.