Binding of Isaac: Rebirth Wiki
Register
Don't have an account?
Sign In
Advertisement
in: Modified in Afterbirth+, Bosses, Champion bosses,
and 5 more
English 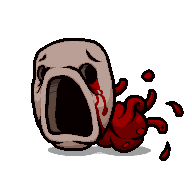 Mask of Infamy is a boss that can appear in

Necropolis.
The Heart of Infamy has 200 HP and the Mask of Infamy the remaining 150.

In the first phase, the two constituent parts act exactly like a regular-sized

Mask + Heart; the Heart of Infamy tries to move away from Isaac while the Mask of Infamy charges at him if he crosses her path in any cardinal direction.

◼ Black: 15% larger. The heart shoots 4 homing shots in a cross formation and has 25% more HP (250). The mask behaves like the normal version during both phases.