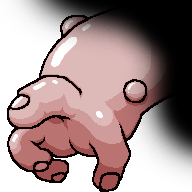 Mama Gurdy is a boss that can appear:

Mama Gurdy resides inside the wall at the top of the room. She has four attacks: