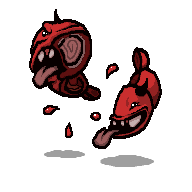 This article is about Lokii, not to be confused with Loki.

Lokii is a boss that can appear:

Lokis. Each half of Lokii teleports to random locations in the room and has the same attacks which they perform independently of each other: