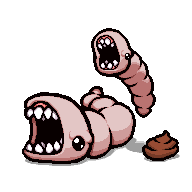 (With Another Larry Jr.,

Larry Jr. is a boss that can appear in the

The number of individual Larry Jr. bodies that can spawn each fight can vary from 1-4. The most common encounter with Larry Jr. is with 2 bodies.

There is a chance that a

Grub can spawn alongside a shorter Larry Jr. (basically replacing a second Larry Jr.) due to its patterns being very similar to the boss.

◼ Blue: Is 15% larger and has 45% more HP (31.9), but moves more slowly and does not leave poop behind. Has shared health between his body segments, meaning that dealing damage to one segment will deal a percentage of the damage to the other segments. This version always drops a

Soul Heart when defeated.
◼ Green: Will occasionally shoot a projectile in the direction he's facing, pausing momentarily as he does so.

When fighting Larry Jr., he can spawn in the following combinations: