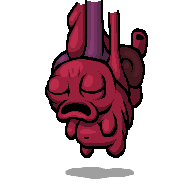 Gateway to The Void if unlocked (10% Chance)

Scarred Womb). After being unlocked, it permanently replaces

It Lives behaves identically to Mom's Heart, with the exceptions of different spawns for its phases: