Binding of Isaac: Rebirth Wiki
Register
Don't have an account?
Sign In
Advertisement
in: Added in Repentance, Chapters, Bugs, Modified in Afterbirth+
English 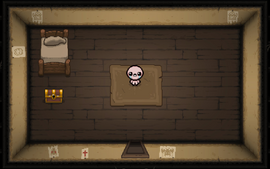 Home is one of the final floors in The Binding of Isaac, alongside the

The Void, and the

Corpse. It was added in The Binding of Isaac: Repentance, and acts as Isaac's house in his imagination.

Home can only be accessed after picking up

Dad's Note and going through the ascent. The bosses of the floor are always

The Home floor has no enemies, and is completely empty. Similar to

??? and the Greed mode floors, its layout is always the same. Home features Isaac's room, two corridors, a room with a pickup, the living room, and Mom's room.

Isaac's room is where Isaac spawns upon entering the stage. It contains a bed in the upper left corner and a carpet in the center, like a regular Bedroom, as well as a

Locked Chest. Isaac can sleep in his bed to recover provided he's not at full health, or to add three

Soul Hearts provided he has no

Red Heart containers. Triggering an explosion on the carpet will cause it to be damaged, but reveal nothing underneath.

A single door in the bottom wall leads to the narrow right corridor. Through a door in the upper side of the right wall is a small room that contains a random pickup or, rarely, an item. Further down in the left wall, there is another door leading to the house's living room.

The living room is double-sized and extends vertically downwards from the entrances at either side. It contains a large turned-off TV, placed against its northern wall, and a couch further south, as well as a red carpet located between them with a massive picture of a cross with wings. A door in the upper left side leads to another narrow corridor, which Isaac can walk north to reach Mom's room.

Mom's room contains a unique chest, a carpet, a dressing table, and Mom's bed — all of them larger than similar items found throughout the game. When the chest is opened for the first time, it will contain the

Red Key, which will be permanently unlocked. In subsequent playthroughs, it draws from its own item pool of Mom related items; the Red Key can still be found, but more rarely. The carpet and the dressing table in this room cannot be interacted with.

Sleeping in Mom's bed will cause Isaac to have a nightmare, showing the loading screen with no floor icons. In the dream, Isaac is sitting next to his mother as she watches TV. Isaac's distorted face then appears on the TV screen, as the noise of static begins to increase in volume.

After a flash of static briefly covering the entire screen, Isaac wakes up again, presumably at night since Home is considerably darker. At this point, when exiting Mom's room and walking down the left corridor, a grey light can be seen through the bottom-right door. The source of this light is the TV in the living room, which is now turned on but only emits static. Stepping on the cross in the living room's carpet will begin the battle against Home's first boss, Dogma.

Upon beating Dogma, a cutscene will play — then the fight with The Beast will start.

In the hallway leading to Mom's bedroom, using either the

Soul of Cain will open up a hidden room. This is hinted by the existence of the closet on the other side of the map, by Isaac's bedroom. There is also a barely visible glowing red outline for the hidden door when the Red Key or Cracked Key has been picked up. The closet is also the place Isaac is thrown into in ending 21.

Missing Poster and respawning as

The Lost) and re-enters the Hidden Closet, the crying baby will not change to the corresponding character, and will stay as the first character it turned into. This means the player cannot unlock two Tainted Characters in the same run. In true co-op, the character in the closet will be the tainted version of player one's character.

If the tainted version of a character has already been unlocked, or a tainted character is being played, the closet will contain

Inner Child. If Inner Child has not been unlocked, it will contain a

The method for obtaining a

Cracked Key during the ascent is described on their respective pages, but

Red Key can also be obtained from

Curse Rooms (if unlocked) or by using

Pandora's Box on the Home floor.