This article is about the boss. For the enemy, see Gurgling (Enemy). 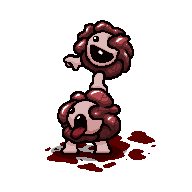 (with another pair of Gurglings, Turdlings, or

(with Chub, The Stain, or Gurdy)

Gurglings are a boss that can appear:

The Gurglings spawn as a pair and wander around the room. Each individual Gurgling has one attack in total which is performed independently of the other:

Troll Bombs at regular intervals instead of Red Creep when rushing towards the player. They take only 5 damage from their own bombs. They don't spawn any Attack Flies.

◼ Yellow: Three Gurglings will appear instead of two. They are faster but do not leave any Creep. They don't spawn any Attack Flies.

Gurglings can spawn in normal or tiny rooms. When fighting Gurglings, the following obstacles can spawn:

In tiny rooms, one Gurgling will appear behind pits.