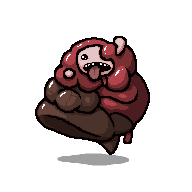 Gurdy Jr. is a boss that can appear in all environments of Chapter 2 (

◼ Blue: Instead of one Gurdy Jr., there will be two 42% smaller ones. This version has 45% less HP than the original (137.5) and only uses the charging attack. It drops a

Super Pooters instead of regular Pooters. Does not shoot projectiles of any sort.