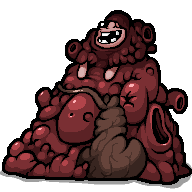 Gurdy is a boss that can appear in the

Gurdy is completely stationary and will always appear in the upper middle of the room. She has three attacks:

◼ Dark Greyish Green: 11% larger and does not use her projectile attack. Instead, she summons monsters at a faster rate.