Binding of Isaac: Rebirth Wiki
Register
Don't have an account?
Sign In
Advertisement
in: Added in Repentance, Bosses, Bugs,
and 4 more
English 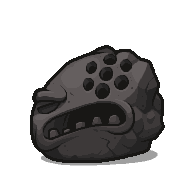 Great Gideon is a boss added in The Binding of Isaac: Repentance that can appear in the

Great Gideon is always fought in a vertical double-size room and has no health in a traditional sense. Instead, Isaac must battle 6 waves of monsters to beat him, similar to Greed Mode waves. Each wave begins once all enemies from the previous wave have been defeated.

He uses the following attacks during these waves:

After Isaac defeats all 6 waves of monsters, Great Gideon will deactivate, similar to a regular