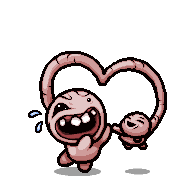 (with another Gemini or Rag Man)
Degraded Boss

This article is about the boss. For the item, see Gemini (Item).

Gemini is a boss that can appear:

Gemini starts as a pair of bosses connected together by an umbilical cord.

Soul Heart if killed last.
◼ Green: They start separated from each other and have no difference in behavior. However, if Contusion is killed last, it will usually drop a

Half Red Heart, but will rarely drop any other type of Heart instead (Soul, Bone, Gold, etc).

When fighting Gemini, the following obstacles can spawn: