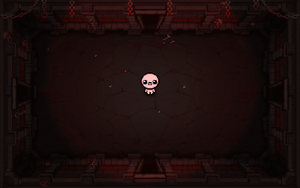 Defeat all bosses in the Mausoleum

Gehenna is an alternative floor to

Mausoleum. Its coloring is red and black with demonic themes. The floor has horned skulls, bones, and blood on the black cracked floor while bloodied chains hang from the walls. It greatly ressembles a torture chamber.

It has a few unique features such as rotating spike balls, red demon fires, and multitudes of spike flooring. Like the Mausoleum, it also has Teleporters to traverse the level.