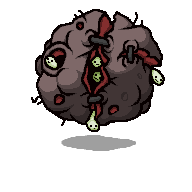 Fistula is a boss that can appear:

The large Fistula has 60 HP, the medium forms have 15 HP, and the small forms have 8 HP.

Boom Flies with 15 health points instead of Chargers. Each piece travels much slower and splits into three medium Fistulas as opposed to the original's four, similar to