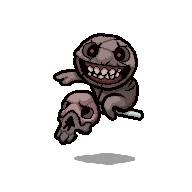 When Famine takes a sufficient amount of damage, his body and horse explode and vanish while only his head remains.

Famine deals a whole heart of contact damage in both phases and during his charge.

◼ Blue: Charges more often and veers towards Isaac (similar to the

Dark One). He can do this attack regardless of whether Isaac is to his sides or not. He will shoot six bullets in all directions instead of summoning Pooters. In Phase 2, he will spit out a cluster of bullets instead of a triple shot, similar to

Monstro's attack, with a lower shot speed than his non-champion version. Will always drop a Soul Heart upon death.