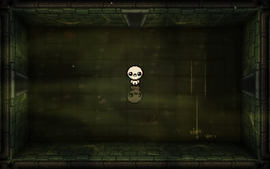 Defeat all bosses in

Dross is one of the environments of chapter 1.5, added in The Binding of Isaac: Repentance.

Dross is an alternative floor to

Downpour, differentiating itself from Downpour by having more poop and sewage-themed enemies. Just like in

Knife Piece 1 can be found on Dross II. Some rooms in this green brick sewage recess have a thin layer of dirtied reflective water on the ground.

Along with the watery floor, many visual effects are employed on this floor, such as:

In Dross, some Rooms may have grates on the walls, expelling a strong water flow. The water flow pushes Isaac and everything else in the Room in one specific direction, usually towards the wall opposing the grates. The river will hamper your movement if you try to push against the current, and speed you up if you go with the flow.

In addition, Dross floors have the rare chance to spawn Giant Poops, Big Poops that take up 4x the space as regular Poops.

Knife Piece 1, one of the key items for accessing the

The mirror can only be entered as the Lost (or

Tainted Forgotten), after which it leads Isaac to the Mirrored world, where he can find the

Once Isaac has the Knife Piece and returns through the mirror back to the real world, he will be converted back to the original character. To acquire

Knife Piece 2 and complete the process, be sure to head to the