Binding of Isaac: Rebirth Wiki
Register
Don't have an account?
Sign In
Advertisement
in: Added in Repentance, Chapters, Modified in Afterbirth+
English 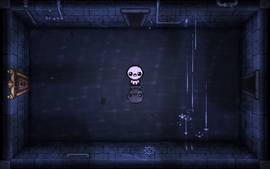 Downpour is the first new environment added in Repentance. The theme of Downpour is flooded, haunted storm drains with many supernatural enemies and elements. Though there is some overlap with the

Flooded Caves due to both featuring water flooding, the Flooded Caves' unique enemies are almost exclusively 'drowned' or 'bloated' as opposed to Downpour's more haunted theme.

Treasure rooms in Downpour always have two items to choose from. One of the items will always be unknown, however, this can be circumvented with the

A Secret Exit is unlocked, a locked door to Downpour I or II will appear upon completing the

Burning Basement I or II, respectively. The locked door requires a key to enter.

Downpour features a heavy emphasis on water and flooding. The entire floor is submerged in water, that some enemies such as Small Leeches and Striders are capable of using to swim over pits. Deep Gapers can also hide beneath the water and emerged when all enemies in the room have been killed. The reflection visible in the water is also utilized by Wraiths, which are always visible in the reflection even though they are invisible otherwise. There is also a storm playing out in the background, which when lightning strikes, brightens up the room and reveals any Wraiths in the room.

Knife Piece 1, one of the key items for accessing the

The mirror can only be entered as the Lost (or

Tainted Forgotten), after which it leads Isaac to the Mirrored world, where he can find

Once Isaac has cleared one room, has obtained the Knife Piece, and returns through the mirror back to the real world, he will be converted back to the original character. To acquire

Knife Piece 2 and complete the process, be sure to head to the